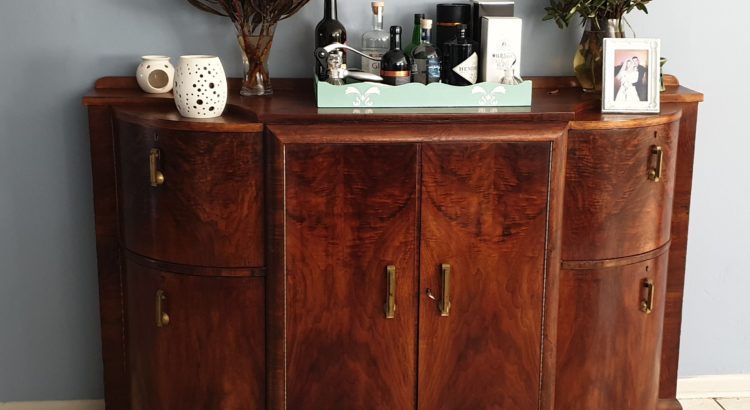 I love old-timey things, and I love to restore and bring these things back to their former glory. I have already posted about some of my tools, and a few furniture pieces that I have restored over the years. This is the first in a three-part piece on my approach and philosophy when it comes to restoration and renovation.

I normally consider several factors before tackling a restoration. This is not an expert list, or by any means exhaustive, but I do hope these factors give guidance on when to restore an old piece of furniture, tool or collectable and when to leave it be.

But firstly, what is a restoration? A restoration typically involves bringing a piece back to its original, or close to original condition or function as possible. Restorations should not change the fundamental design elements of the piece and where possible should use as much of the original components as is practical. Where substitutes are used they should be authentic to the period and should not detract or distract from the overall appeal of the piece. Any repairs should blend seamlessly into the original. When considering whether to restore a piece, I usually run through the following check list.

How old and how rare is it?

People often use the term antique to describe anything that is old. However, something is only considered an antique if it is older than 100 years. Anything less than 100 but older than 20 years is considered vintage or retro. I normally avoid working with antiques because I am always worried about destroying the value. I would certainly not work on a rare antique without careful consideration of what effect it would have on its value. While antique does not always mean valuable, the last thing the owner of any antique wants is to destroy value through a careless restoration. That value is not always monetary, it could also be sentimental. I am a little more liberal when it comes to vintage pieces. These pieces are usually solidly constructed from high quality wood by master craftsmen and take well to restoration, while others were mass produced and are quite ubiquitous.

What material is it made from?

Many antique pieces are made from rare hard woods that are now endangered or not commercially available. This includes woods like Rosewood, trade of which is banned under CITES, and Yellowwood which is protected in South Africa. Although not on the CITES list Imbuia is on the IUCN Red List. Vintage pieces, especially ball and claw furniture, are often made from this beautiful wood. Art deco period pieces are typically made with hardwood veneers, especially Walnut burl, and Rosewood and incorporate composites including chrome, Bakelite and mother-of pearl inlays. These materials are often hard to come by and therefore difficult to restore.

What condition is it in?

A piece in museum show condition should be left in that condition. However, an antique piece with broken and missing pieces or loose joints is a good candidate for restoration, providing its not going to affect its value. Care should be taken when refinishing or repairing a piece not to destroy the patina. It’s often the patina that collectors are interested in or that give pieces their value. The ease with which it is to find replacement parts or substitutes should also be considered.

Do I know what I am doing?

I once attempted to restore an old valve radio. I know nothing about valve radios, and despite a wealth of information online and some understanding of electronics, I could not figure out how to do this. I abandoned the idea being afraid that I was going to either electrocute myself, burn the house down, destroy the radio or all three. I still have it though and will probably get a valve radio expert to repair it at some stage. If I am not sure what I am doing, I would rather leave it alone or consult an expert.

We inherited an Art Deco drinks cabinet from my wife’s Grandmother. We are not quite sure how old it is, but it stood for 60 odd years in their house starting in the late 1940s. We think it originally belonged to my wife’s great grandmother who moved in with her kids shorty after they setup house. We have owned it for a little under 15 years, so that makes it somewhere between 70 and 80 years old if not older. It’s not quite an antique yet but it is old and not far from being an antique.  There are still a lot of Art Deco pieces in circulation, so it is not really that rare. There are no maker’s marks, identifiers or serial numbers on it.

It is constructed from block board sandwiched between thin sheets of plywood, common construction for Depression era furniture. The top coat however is a Walnut veneer with some burl on the doors. When we inherited it, it was not in great condition. The cabinet stood in the entrance hall in the grandparent’s house, and the right hand side that faced the front door had taken something of a beating. Sunlight had faded the finish and it had started to craze. The top had some deep scratches. At some point in its history, someone had re-varnished the top, and had not done a great job. The occasional spray from heavy Joburg thunderstorms coming through the front door had caused water damage on the side. The veneer was chipped and cracked and in places had peeled off completely. We brought it to Cape Town when we moved down in 2008. It is a remarkable piece of furniture, and we have often had people walk into the house and walk straight to it to admire it.

My wife was not that keen for me to restore it because of its sentimental value and was worried about the project not ending well. I felt confident that a restoration was possible. After our first Cape winter, I was concerned that the change in climate was causing the piece to fall apart. Large portions of the block board on the base were de-laminating and the cabinet was in danger of collapsing. The veneer had degenerated further and large sections had peeled off completely. One weekend, while my wife was visiting family in Joburg, I started to restore it as a surprise for her return.

I scraped off the old varnish and re-glued and fixed the broken block board with PVA wood glue. I repaired and re-glued the peeling veneer. The veneer, already smooth from being scraped was sanded through to 1000 grit with water paper to create an ultra-smooth and shiny surface. However, I was not satisfied with the colour of the finish. Some of the veneer had taken on an uneven colouring and my repair job on the veneer introduced further colour variations. The solution was to use a walnut wood stain to even out and standardise the colour. A further sanding with steel wool after the staining was followed by three coats of a high-quality polyurethane silk varnish. The scratch and water proof finish had the gleam and feel of what I think the original art deco finish would have had. The original brass hardware was cleaned and repaired and re-fitted.

Running through my checklist, was this a good candidate for restoration? This was old, but not antique. It was not rare, and while we couldn’t determine an exact value or manufacturer, I felt confident I was not destroying a long-lost art work of high value. Its sentimental value outweighed any commercial value and the intention was to retain it, not sell it. It had started to deteriorate, and repairs would be needed to extend its life. Despite my wife’s misgivings, I do sorta-kinda know what I am doing and have successfully restored several pieces of furniture. Ten years later and it still looks good. My wife was happy with the outcome, and I am sure that it will be with us for more years to come. The piece was restored to as near as possible its original condition with all original components being refitted.

I have already written about the restoration of a mid-century chest of drawers. This piece was not nearly as old, valuable or sentimental as the drinks cabinet. But the same principles apply. However, while doing this restoration, I did allow for two minor changes. Instead of a French wax finish, I substituted a polyurethane varnish. I felt that the polyurethane would show off the colour and beauty of the wood more than the French wax, which while beautiful, tends to hide the grain and colour of the wood. I also felt that a scratch and water-resistant finish would be more desirable considering the piece’s intended use. I did distress the finish slightly, so it created something of a patina. I could not match or repair the damaged drawer pulls, so I substituted with new brass drawer pulls with an antiqued finish that matched the age and condition of the piece and enhanced the overall appeal.

In part II I will talk about the When’s and Why’s of refurbishment. 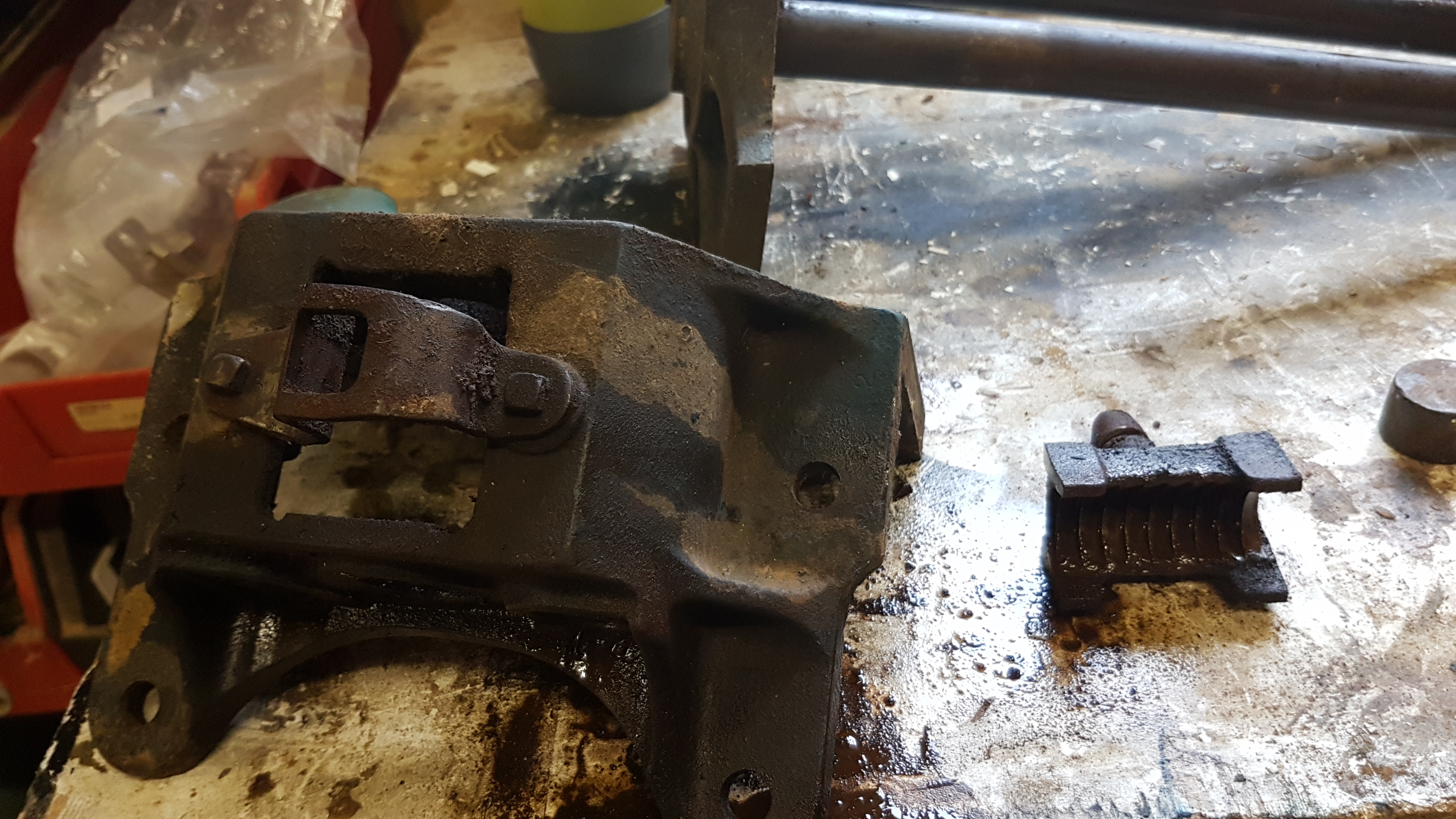 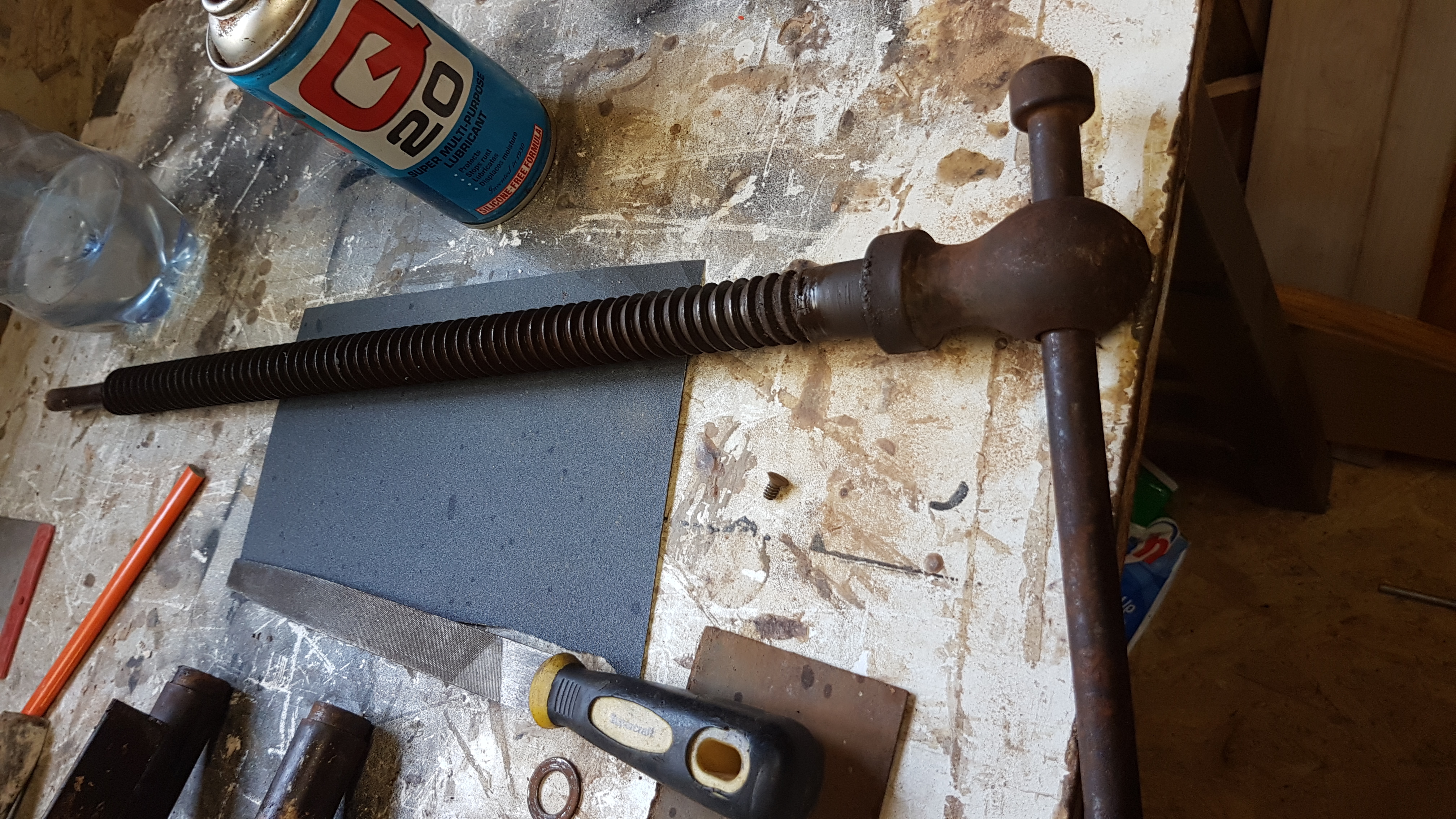 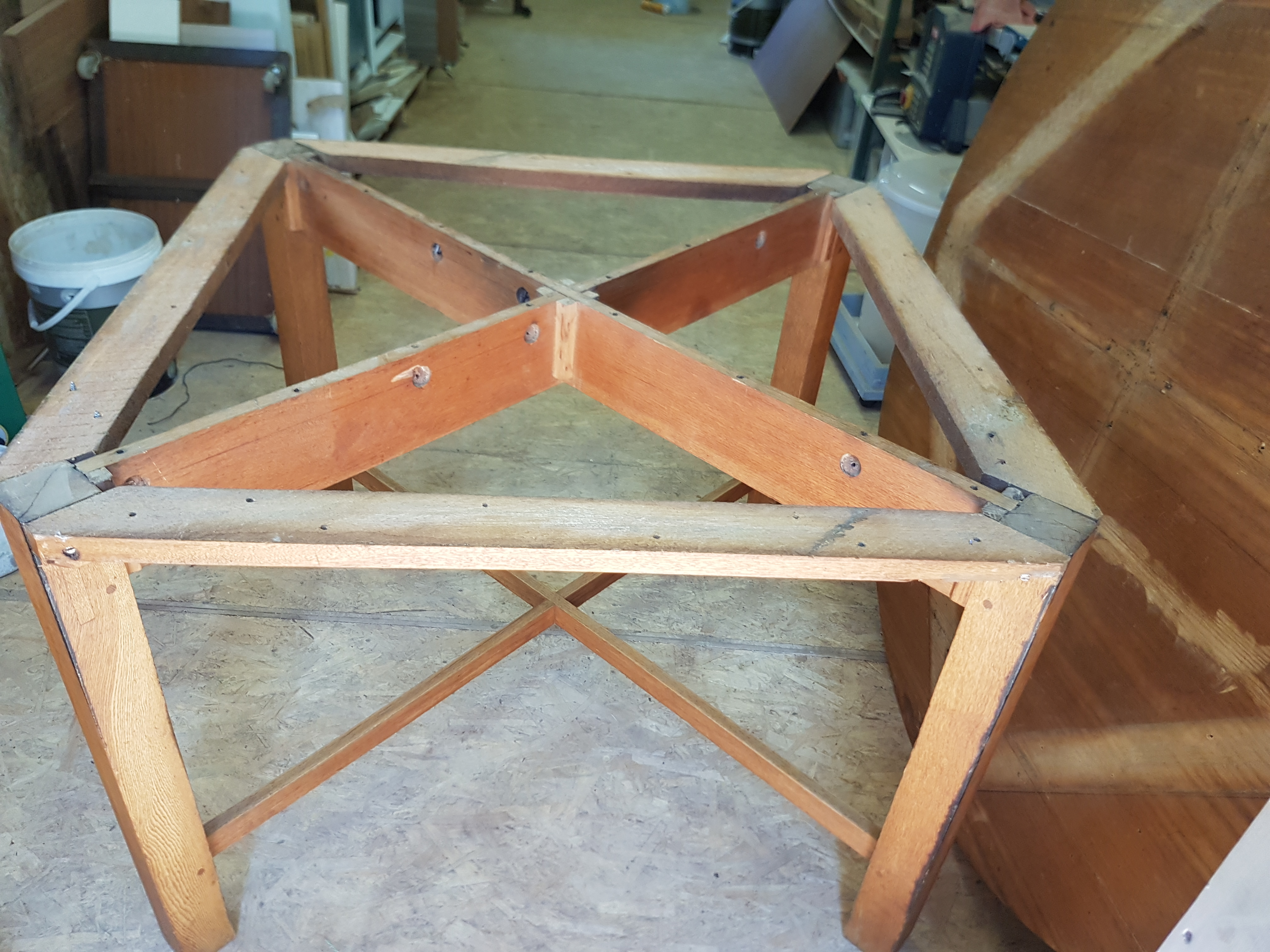 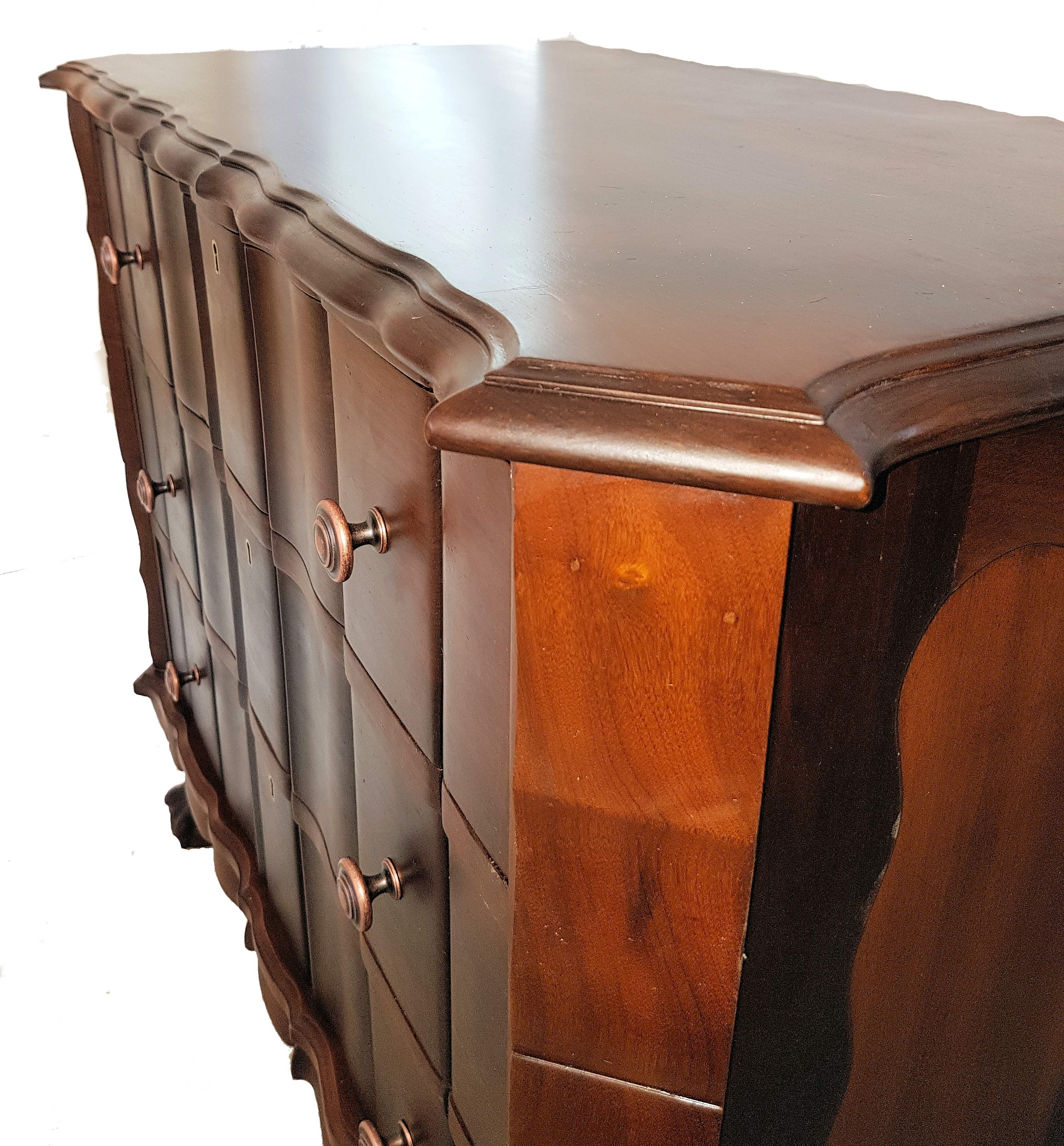 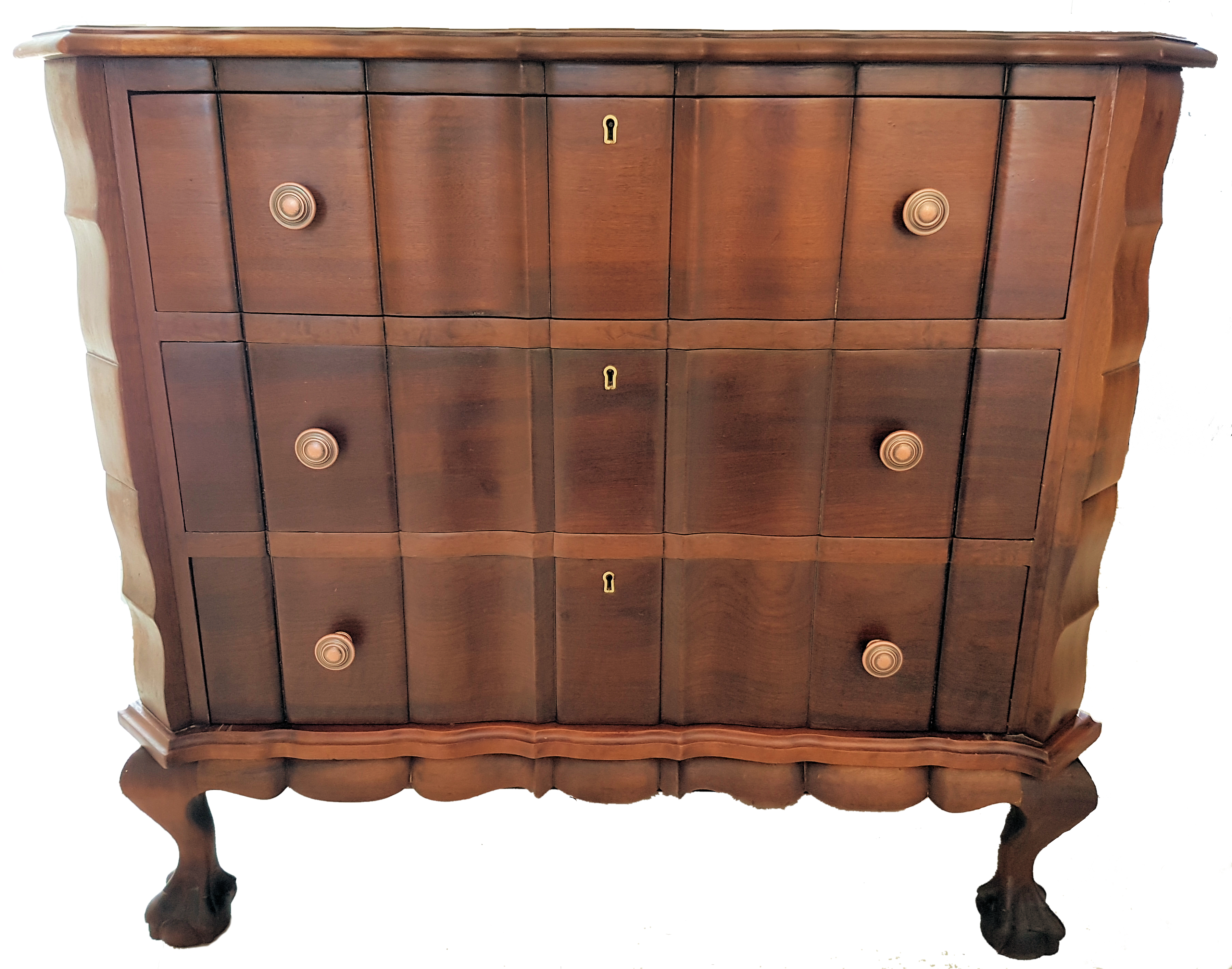 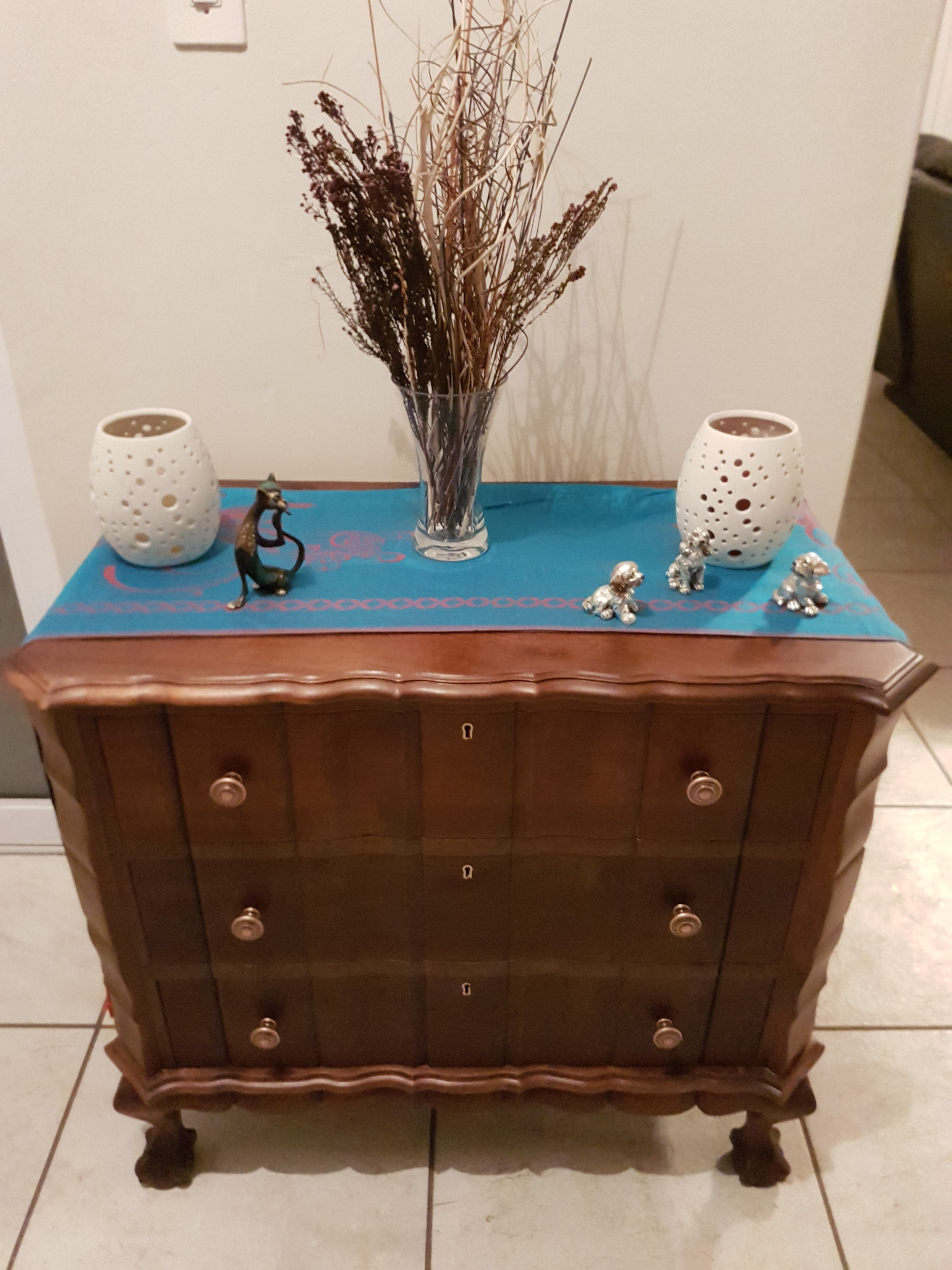